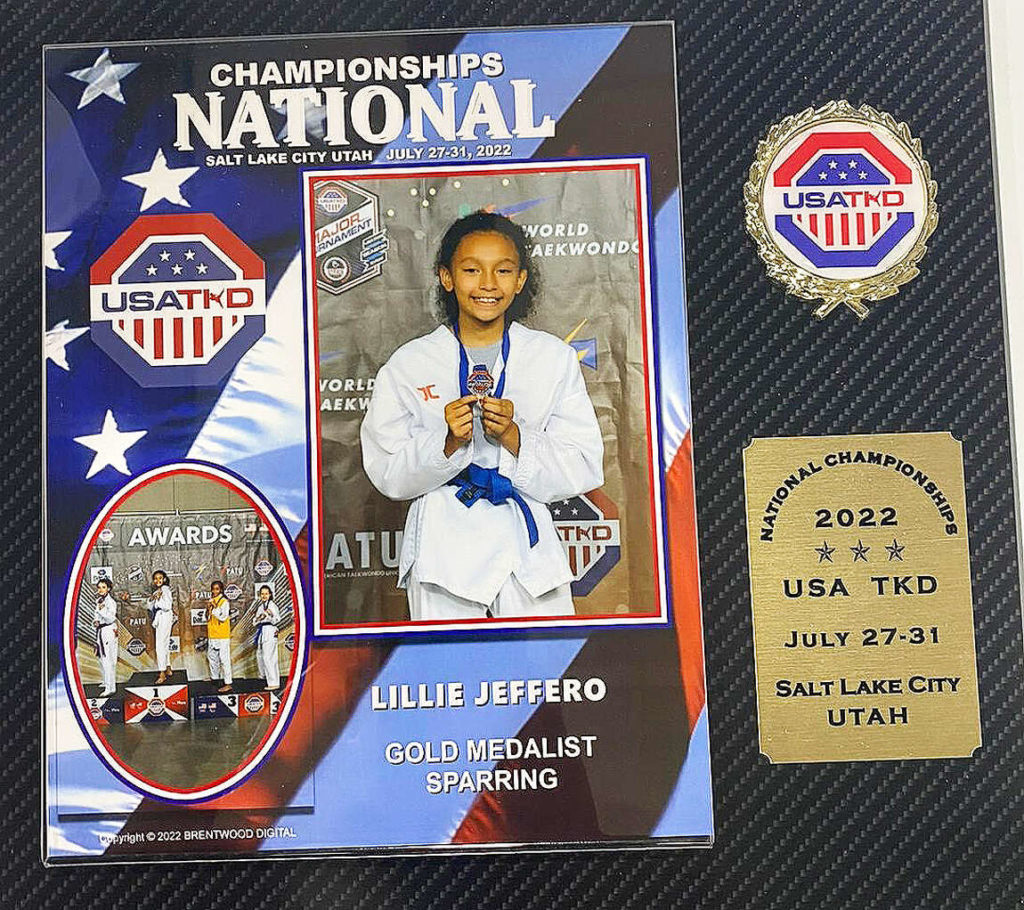 Seconds away from defeat, an Atascocita fifth grader dug deep and kicked her way to a narrow win at the 2022 USATKD National Championships in Salt Lake City, Utah, earning a national taekwondo title.

Lillie Jeffero, who attends Oaks Elementary in Humble ISD, was down four points to her third-seed opponent Abby Cullen of Virginia in the waning moments of the third round. Lillie handily won the first round, and then lost the second round. She was gassed.

“I don’t think it was the sea level, but I was having a hard time getting my breath,” she said. Her father believes it was a panic attack.

Through most of the third round, she fell behind four to zero. With only 20 seconds left, she realized she had to start kicking to earn the points if there was going to be a comeback. Her father and coach were yelling and cheering for her from the corner to start kicking.

“It was in God’s hands,” she said to herself. The spunky 9-year-old got in one kick to the body, and then a final kick just seconds before the end of the round and tied the score up. By rule when there’s a tie, they check the number of kicks registered in their equipment that counts strikes. Lillie won by a narrow margin of 8-7 and her hands were lifted in victory.

“I was really tired,” she said. She collapsed in a chair following the match, finally regained her breath and was able to enjoy her win.

“I think I was just scared because I’ve never been under so much pressure,” the youngster said.

The win culminated in an unbelievable season of hard work and training that took her to the top of the sport in just one year.

“When I saw that my daughter was getting more advanced, I decided to look into another type of sparring that was more competitive,” he said of the transition.

He switched her over to Olympic sparring in August of 2021. Lillie learned the new method with hard training and practice and began participating in tournaments.

“At first she won all of her tournaments, but then she hit a losing streak,” he said.

Her father made another change to South Tejas Taekwondo and the master at the dojo had helped his own daughter to the No. 1 ranking in the nation.

“Once he started working with my daughter, she won a state championship, won the Grand Prix, and entered the nationals ranked number one off those USA Taekwondo tournaments,” he said proudly.

When she won the nationals competition in Utah, that solidified her ranking as No. 1 in the nation in the minus 35 kilograms (77-pound weight) category for blue belt youth.

Having accomplished the national championship at that level, her dad says she’s ready for red belt division.

“This is her first year in the sport and she’s accomplished all of this and switched from one style to another, having to learn a new set of rules. That’s a major accomplishment,” he said.

She’s currently participating in both USAT and AAU teams and in the future hope for a stipend at a university like Texas in Austin.

He’s hoping that by the time she graduates high school, that the university will be offering scholarships.

“When she moves up in weight class, she’ll lose half of her points, but with a win at the Texas State tournament, that would help her qualify for the Grand Prix in Iowa and nationals in Jacksonville, Florida,” he said.

Her dad records every fight in every tournament.

“We sit down, and we break down the footage to see what she could have done better and then we go practice. We show our video to the coach,” he said.

“You win some, you lose some, but I learn from my mistakes,” Lillie said.

“She’s been working with me for a good nine months to a year whenever she transitioned from ITF to WTF, two different concepts,” he said.

“When she started training, it kind of all fell in place for her. We want to see her go to the next level and she’s in the right spot where she needs to be. She just needs to keep up the good work,” he said.

She loves school and has participated in Destination Imagination. She’s a member of the student council, plays basketball on an AAU team called the Lady Rimshakers, and is on the A/B Honor Roll at school.

Her aspirations include owning her own mall with a grocery store, a basketball court, and a dojo in that mall.

“I want to be the CEO and own the whole mall,” she envisioned.

She’s already earned $600 with her snack shop she runs from her home.

“The cops in my neighborhood sometimes drop by and buy things and sometimes they just give me money to show support,” she said proudly. She also has support from the rest of her family.

In the meantime, she works on her academic goals of getting to college and majoring in business.

“I’m going to keep on selling snacks so I can buy a food truck,” she said, to make more money.