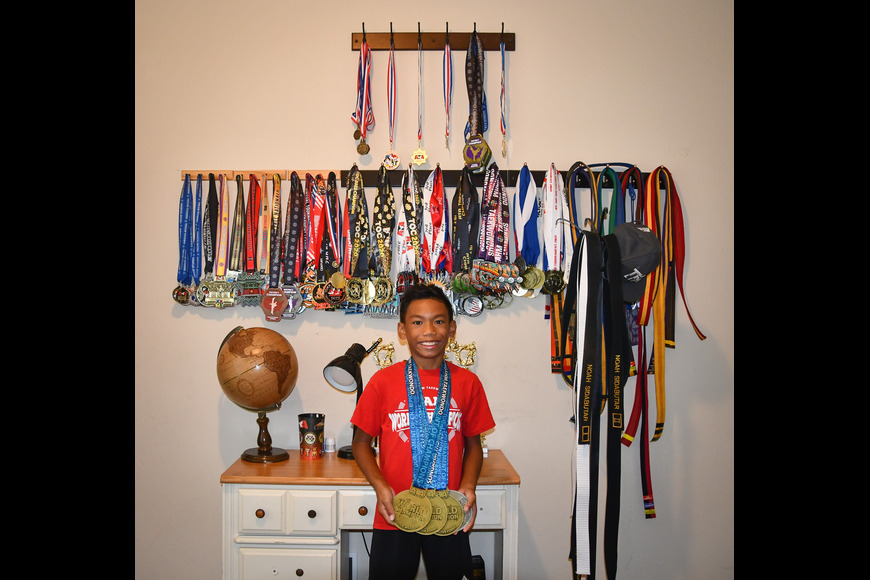 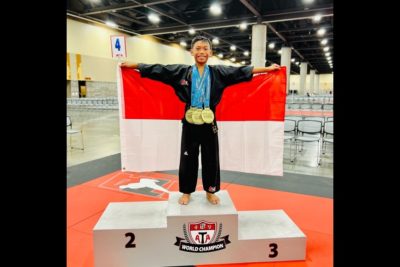 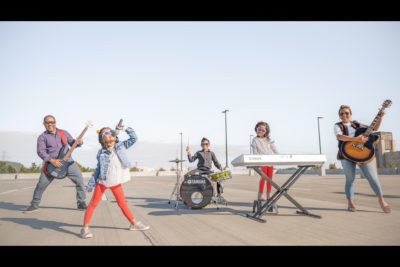 “It feels great,” he said. “A lot of my friends, they sit at home and play video games, and it’s very awesome to know that I’m not sitting at home being lazy during the summer but instead I am training. I am practicing, and this is going to help me set up a good future for myself.”

Last year, Noah attended the Tournament of Champions with his family. This year, it was strictly a “business trip” — he only went with his mother, Juliann Sidabutar.

“It’s better if you go last at worlds,” he said. “Because the judges, if you are the last one, they have you fresh in their memory when they are deciding who will win.”

An American Taekwondo Assocition Martial Arts Organization competitor, Noah participated in several tournaments this year that earned him top ranking spots prior to competition at the ATA World Championships.

For Creative Form and Xtreme Form, Noah was ranked No. 2, so he went second to last. For Xtreme Weapon, he was third in the world but because of a tie, he went fourth to last.

Before taekwondo, Noah, 12, tried myriad sports — including baseball, basketball, soccer and swimming. But, nothing resonated with him quite like the martial art form, which he discovered at age 7 as a student at Victory Martial Arts in Altamonte Springs and then in Ocoee.

“I liked it from the first class; I was pretty good so I kept going with it,” he said.

Noah is not the first in his family to practice the martial arts. His father, Immanuel Sidabutar, used to practice Indonesian taekwondo when he still lived in Indonesia, prior to moving to the United States in 2002.

At first, taekwondo was just a hobby to Noah. However, he snagged two second-place finishes —  one in Creative Form and the other one in Traditional Form — in his first tournament. At his second tournament, Noah won his first gold medal.

It took Noah three years to earn his black belt. In June 2021, he achieved his second-degree blackbelt.

“You have to undergo two years of curriculums,” Juliann Sidabutar said. “Then, you also have to do four midterm tests.”

Noah said midterms are always harder than the actual belt test. The belt test is structured to fit every taekwondo student, but the midterms are tailored to the school’s standards and students’ abilities.

According to his mom, Noah’s world championship title did not come without sacrifice and dedication.

“Three years ago, he couldn’t even earn a district title,” Juliann Sidabutar said. “And then we started going to several ATA national tournaments, and he couldn’t even get a gold. … And we said, ‘Keep going, keep grinding, we support you.’”

When COVID-19 hit, Noah’s family became a huge support system. They helped him cover the entire living room with mats. His parents enrolled him in classes at Orlando Parkour in Longwood, so he could practice his acrobatics.

“It’s been a lot of time (put in), a lot of money, a lot of energy, a lot of sacrifice,” his mom said. “His sisters have also sacrificed a lot (by) just waiting at the tournaments.”

Both, Juliann and Immanuel Sidabutar are part of the staff at People of Faith Lutheran Church.

Two weeks prior to worlds, Noah needed a bigger space to practice, so his parents helped him set up at the church and put the music on the speakers.

Looking forward, the Sidabutars are looking to grow within the martial arts world. They currently are gathering information about the North American Sport Karate Association, to help Noah with his pursuit of new opportunities that may arise in the future.