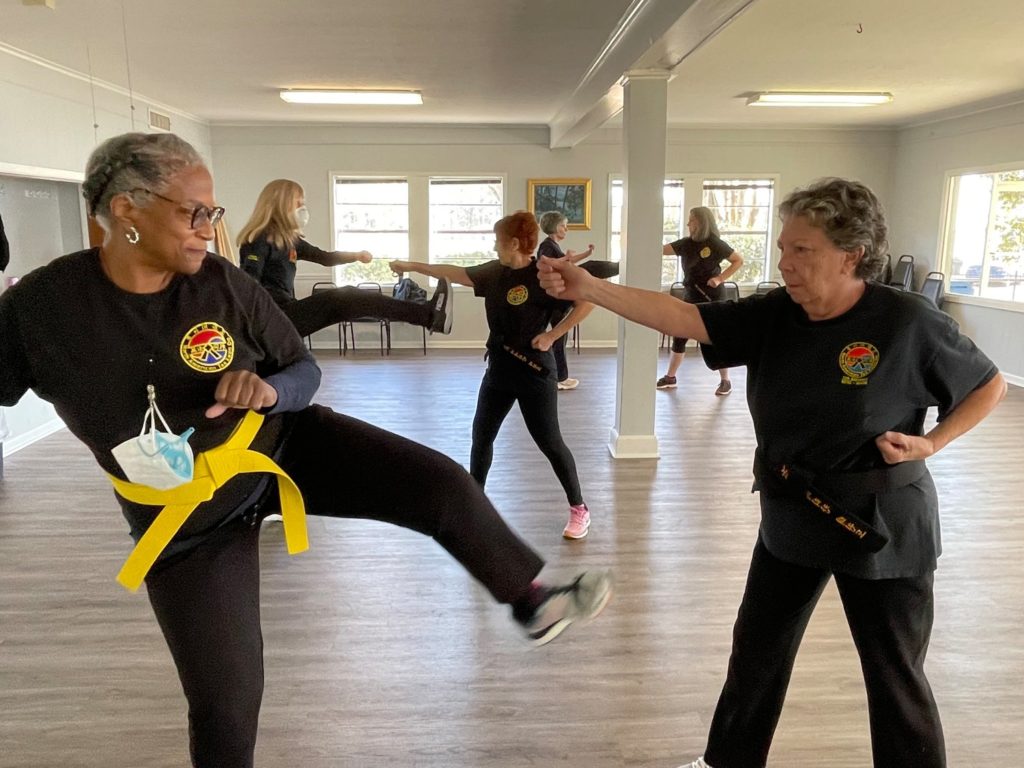 RIDGELAND — Jo Dillon may be 73 years old, but her age hasn’t stopped her from earning a black belt in martial arts along with several other ladies in her weekly class at the Old Trace Park Recreational Center.

Dillon, a Gluckstadt resident, began attending the classes in 2016, which are taught by her husband, Andy Dillion. She received her black belt in October 2021 and said she isn’t even the oldest in the group.

Dillon said she joined the class when her husband began teaching the Taekwondo class in 2016 since she felt it was finally her chance. She added she has learned many helpful things and said the oldest woman in the group improved things like her balance.

Dillon said her class does everything a normal black belt would do, including breaking wood boards and the different fighting moves and stances. She added that her favorite part of the class is the knowledge she has gained and a better sense of her surroundings.

“I’ve stopped taking a purse to Walmart and only carry what is necessary to go the store, or anywhere for that matter,” Dillon said. “I also like that we are getting refreshed on earlier courses since our more recent member Paulette is a yellow belt and still learning.”

Diane Malouse, another black belt from Ridgeland, said this class is the best thing that has ever happened to her.

“When I started here, I couldn’t stand up straight and was falling all the time,” Malouse said. “I improved everything from my balance to my coordination. Things have been great here.”

Lynda Jungkind, a Ridgeland resident, black belt, and long-time member, said she joined the class to learn self-defense and had no idea she would learn so many things about Taekwondo. She said she has learned so much from the class and enjoys the sisterhood created through the years of learning with the other ladies.

“I enjoy my newfound confidence and stronger knees,” Jungkind said. “I look forward to this class every week, and I had no idea I would get so much out of it. I’ve improved my balance, memory skills, and learned things that will come in handy, but things I hope I won’t end up having to use. Andy is so patient with us as well.”

Paulette Grim, a newer student from Madison, joined the class two years ago and received her yellow belt in October 2021. She is currently working on her green belt.

“The Martial Arts and self-defense I have learned makes this class very interesting,” Grim said. “We learn something new every week, and it keeps our brains working, and I enjoy being here a lot. Everyone is helpful when I’m learning something and need assistance with it. I would recommend this class to anyone and would say the self-defense skills are the best thing I’ve gotten out of this.”

Sandy Mueller, another black belt from Ridgeland, also said self-defense is why she joined the class and is the most important thing she has learned.

“As others have said, we have a fantastic instructor,” Mueller said. “Andy is very patient with us, and I have made a lot of friends here.”

Andy Dillon, the instructor for the Taekwondo class, got into the practice in 1994 and started teaching self-defense at the Ridgeland Recreational Center after he got his black belt in 2000. He began teaching Taekwondo in 2016.

After working with Lynda Assink, the previous senior program coordinator, Dillon decided to begin a Taekwondo class when he researched the positive physical and mental benefits of the Martial Arts practice.

Dillon said the ladies must know all the moves in Taekwondo and be aware of how to fight if a real confrontation occurs.

“With their age, we do have some workarounds, but besides that, they do everything they’re supposed to,” he said. “This is a great class, and everyone here has stuck around.”