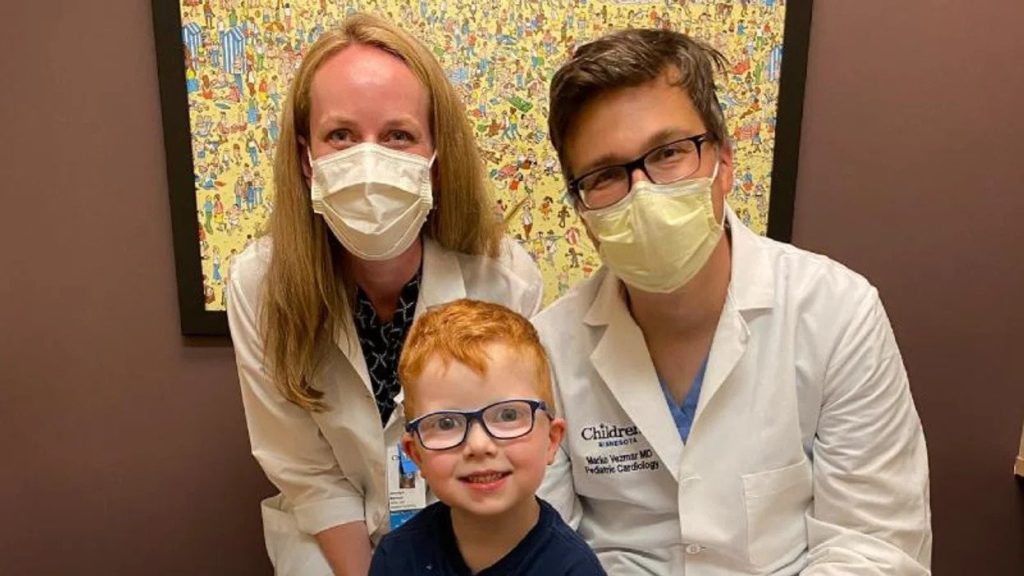 Her husband, Tyler, started bringing belongings to the car as the happy couple prepared to go home about 24 hours after Henry was born.

Then, Stephanie heard footsteps. Someone was running down the hall of the hospital in Woodbury, Minnesota. A nurse rushed into the room. Plans had changed.

A pulse oximeter test found that Henry had a critically low level of oxygen in his blood. He needed to undergo more tests at a hospital about 20 miles away in Minneapolis. An ambulance took Henry, while Stephanie and Tyler drove.

A cardiologist ordered an echocardiogram, an ultrasound test that checks the structure of the heart and how well it is pumping. After the results came in, the doctor pulled the couple into a small office. The room had a window. Through it, Stephanie could see Henry in an incubator.

He was diagnosed with hypoplastic left heart syndrome (HLHS), a congenital heart defect in which parts of the left side of the heart, including the left ventricle and aorta, are too small. This makes it difficult for the heart to pump oxygen-rich blood to the rest of the body.

Stephanie trembled, fearing the worst. Their first child, Madelyn, who was born two years earlier, was completely healthy. The Johnsons took for granted that Henry would be born without complications, too.

Then the doctor said, “I can do something for him. It’s going to be a rough road, but we can try.”

Henry would need three surgeries over the next few years. Bit by bit, doctors would increase the blood flow to the rest of his body by avoiding the compromised left side of his heart. More specifically, they’d create a new connection between the veins returning low-oxygen blood to the heart and the pulmonary artery so the properly functioning right ventricle could pump only oxygenated blood to the body.

The first open-heart surgery came when Henry was 10 days old, his heart just the size of a walnut. Complications kept him in the hospital for nearly two months. For much of that time, he remained connected to a ventilator.

“The only way I could tell if he was crying is when the alarms would go off, because you can’t hear him cry because of the tube,” Stephanie said.

The second open-heart surgery came when Henry was 5 months old. It went so well he returned home after seven days. His third surgery was at age 3; it would’ve been sooner, but the start of the COVID-19 pandemic delayed it until June 2020.

Today, the Johnsons make sure Henry lives as normal a life as the rambunctious 5-year-old can possibly lead.

In preschool now, Henry is eager to attend full-time kindergarten in the fall. He loves taekwondo, Captain America and the musical “Annie” – so much so that he dances through the house with a broom singing “It’s A Hard Knock Life,” and even hopes to have a butler one day.

“What has always stood out for me with Henry is his fire for life, even when he was tiny,” said Jocelyn Berbee, a nurse practitioner in pediatric cardiology who has been part of Henry’s care team since infancy.

While the surgeries have made a difference, they are not a permanent fix. Henry will need to see a cardiologist regularly for the rest of his life and may one day need a heart transplant.

“Medical technology keeps advancing, so we don’t know for sure. But that has been the typical pathway for this heart problem,” Berbee said.

“Right now, everything is working beautifully,” she added. “But there’s a lot of unknowns that go along with it as well.”

Stephanie hopes sharing her son’s story will help other parents navigating the kind of unknowns and tough decisions that her family faced.

“It’s just incredibly important that we raise awareness so not only can parents detect and see signs of what a congenital heart defect might look like in their own children,” Stephanie said, “but also so that these kids like Henry can live full, happy lives without the worry.”