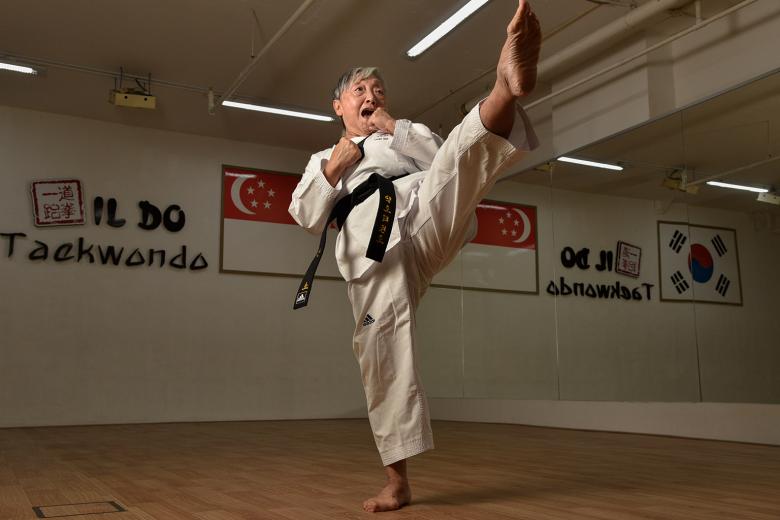 Struck with knee pain, she decided to take charge of her life, picking up the sport and inspiring other seniors to do the same

A taekwondo black belt achieved in under three years. A gold medal at a national taekwondo competition. Three double promotions, rewarded for the exceptional mastery of techniques as well as outstanding attitude, application, and attendance in the martial art.

The most impressive part? Ms Lynn Soh was 77 years old when she achieved all of these.

Obviously not one to be easily contented, she is currently awaiting grading for her second-degree black belt (there are a total of nine dans, or ranks in black belt). When she is not in her dobok, Ms Soh stays active by taking brisk walks, swimming, and cycling on a stationary bike.

It’s hard to imagine Ms Soh being anything but an active person with an athletic lifestyle.

However, she shares that when she was in her 30s, a hectic job as a senior travel executive spared her little time to spend with her family, much less exercise. Other than a bout of running she picked up in a bid to lose weight in her 40s, exercise was never a priority.

It was not until later in her 60s, when she woke up one morning unable to stand or walk, that she realised she had to take charge of her life.

“My world fell apart that day,” she recalls. “I thought to myself – ‘do I need a wheelchair and a caretaker?’. I was determined not to burden my daughter’s family.”

Ms Soh was diagnosed with sciatica, or nerve pain that radiates from the lower back to either leg. In her case, it was her left knee that had given way. After two years of physiotherapy, her condition improved, but it wasn’t enough: “I was better, yet I couldn’t squat. It seemed as though my muscles were still weak.”

One fateful evening while shopping at Bukit Timah Shopping Centre in 2018 would prove to be the turning point she needed. There, she chanced upon ILDO Taekwondo Academy, and while observing the students warm up for their class through the studio’s glass windows, realised that the techniques and movements employed were similar to what she had learned at her physiotherapy sessions.

Intrigued, she did her research online, and found out that in addition to the sport, taekwondo masters were also trained in physiotherapy and chiropractice. The knowledge that she would be in safe hands gave her the confidence to register with the studio.

“The studio wanted my orthopaedic surgeon to certify that I was ready before they agreed to let me attend a trial class, but eventually they accepted me,” she says. “The masters took special care of me, and only allowed me to attend class once a week for an hour each time.”

Even with a controlled start, Ms Soh saw results quickly: in just four months, she realised she was able to squat. The pain she often felt in her body and legs in the mornings was gone as well, and she had no trouble climbing stairs.

Encouraged, she took her first grading test and achieved her first double promotion. Over the next couple of years, she rose through the ranks rapidly, her progress culminating in a black belt and gold medal at the 13th National Poomsae Championships in 2019.

“Taekwondo has taught me to be more respectful and humbler,” she says. “I feel more alert and confident that I can handle any tasks that come my way!”

Making waves in the community

Ms Soh’s achievements and love for the sport have not gone unnoticed.

Much like how she was once inspired to sign up for taekwondo after spectating at ILDO Taekwondo, her presence at the studio has also spurred other seniors to do the same – so much so that the studio had to start a new class specially for seniors.

“When the studio put up an advertisement for the Silver class, it was immediately full,” she shares. “Now, even my orthopaedic surgeon wants his son to take up taekwondo!”

Ms Soh has come a long way since that morning she found herself unable to walk. With her experience, she hopes to inspire other seniors to view ageing as “the beginning of a new chapter”.

“Though we age, we are still nowhere close to the end of our lives! Being old does not have to mean aches and pains – with a proper diet, exercise and good sleep, we can turn things around.”

And it’s a good thing she has turned things around for herself too. After all, she still has a long laundry list of things she hopes to achieve soon.

“Besides getting my third dan in taekwondo, I also want to cycle for a good cause, continue kick-boxing, learn more about jiu-jitsu and pick up rock climbing.”

original story from the straits times