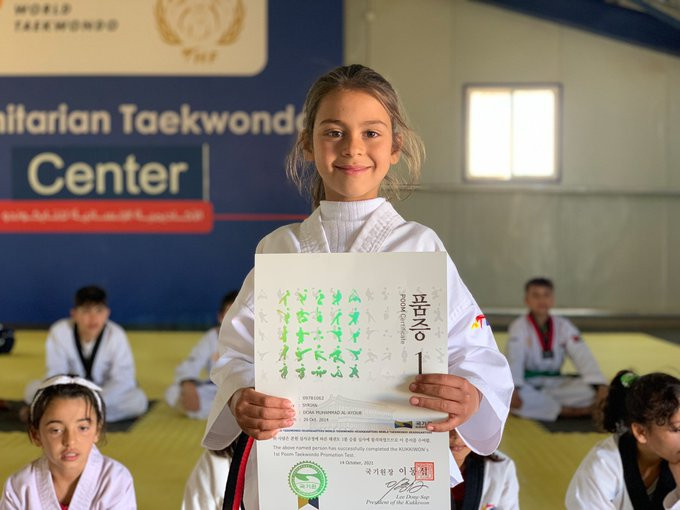 Seven-year-old Doa’a Al-Ayoub has officially received her black belt certificate in taekwondo at the Azraq Refugee Camp in Jordan.

Aged six at the time, Al-Ayoub became the youngest refugee to be awarded the highest colour grade in the combat sport in September last year.

Al-Ayoub has now received her certificate to mark her achievement, and received congratulations from the United Nations Refugee Agency (UNCHR) in Jordan, which tweeted “next stop: the Olympics!”

She earned the black belt alongside 15 other students at the Azraq Taekwondo Academy, which was launched in September 2015 by World Taekwondo President Chungwon Choue and managed by the Taekwondo Humanitarian Foundation (THF).

The THF aims to empower refugees, asylum seekers and other displaced people through taekwondo.

Its Academy at the Azraq Refugee Camp is one of its longest-running projects, having begun in April 2016.

Others projects managed by the THF around the world include a recently announced initiative at the Malindza Refugee Camp in Eswatini.

The Azraq Refugee Camp was established in April 2014, following the outbreak of the conflict in neighbouring Syria.

Last year, the UNCHR reported that it is home to more than 37,000 refugees from Syria.

Original story reported by inside the games.