Life lessons from anime and martial arts: Japanese intuitive learning teaches that relying on experience is what counts 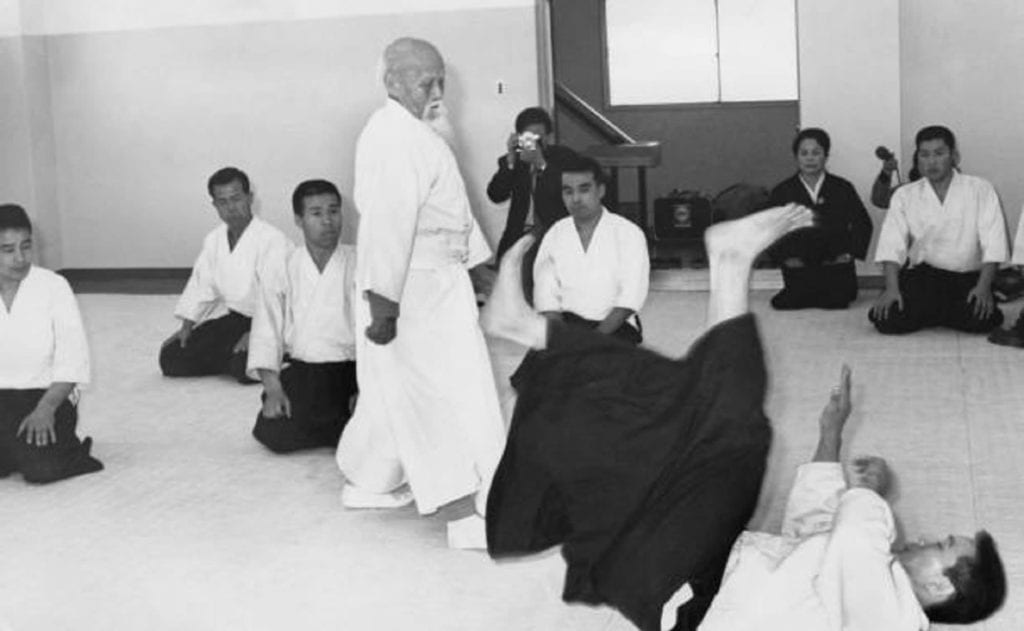 Aikido founder Morihei Ueshiba, standing, gives a demonstration in Tokyo in 1967. The author’s experiences in learning the martial art in Japan were very different than they were in the U.S.      © Getty Images

There is a scene in the hit Japanese anime TV series “Demon Slayer: Kimetsu no Yaiba ” in which the demon slaying mentor, Sabito, tells the hero, Tanjiro, that he is failing to learn his craft properly because “your body doesn’t understand anything.”

Sabito’s jibe echoes the Zen master D.T. Suzuki (1870-1966), who once said that “When the ultimate perfection is attained, the body and limbs perform by themselves what is assigned to them to do with no interference from the mind.”

Ultimately, Tanjiro achieves the necessary level of skill through intense and relentless sword fights with Sabito, who “beats the lessons into the marrow of his bones.” The only way to learn, Sabito says, is to train as if one’s life depends on it. Eventually, Tanjiro cuts through a giant boulder with his blade and becomes a fully-fledged Demon Slayer.

When I moved to Japan, I studied the martial art of aikido as a way of learning Japanese culture. After about six months, I grew frustrated because the sensei never taught us anything. He would demonstrate moves and we would practice them repeatedly, but there was no actual instruction.

I had studied some aikido in the U.S., where the American sensei would break each move down into discrete steps and explain the technique required for each. I could not understand Japanese-style intuitive learning. When I asked my Japanese sensei about this, he calmly replied that I should not think of the mind and body as separate. Instead, we should learn through both. Although this method took time, the lessons were ingrained much more deeply. 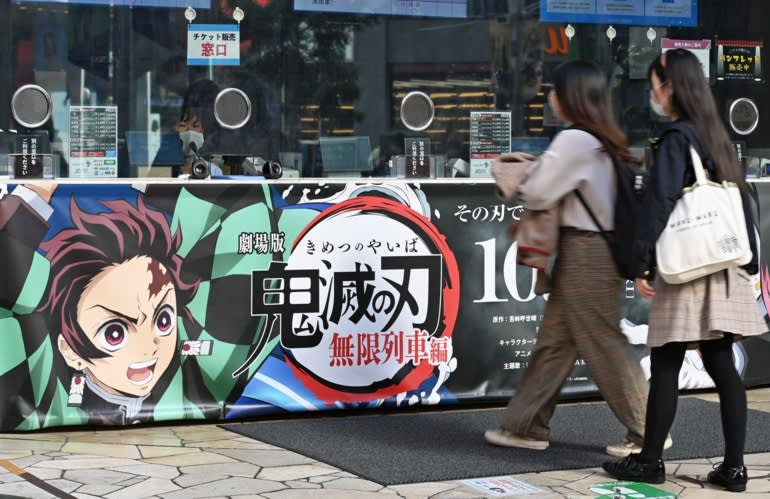 A poster for the popular Japanese animated movie “Demon Slayer” is displayed at a theater in Tokyo in October 2020. (Photo by Shihoko Nakaoka).

This experiential teaching technique is not confined to martial arts. The daughter of a Japanese friend joined a tennis club at her school and did not pick up a racket for a year. As a linear thinker, my expectation was that swinging a tennis racket and receiving instruction was the best way to learn. But at this tennis club the beginner students spent their first year picking up balls and observing experienced players.

This is similar to the experience of traditional sushi chefs, who may work for 10 years before they slice a fish. In the West, 10,000 hours of practice is widely regarded as sufficient to gain mastery of a subject. But trainee sushi chefs work for around 20,000 hours, slicing vegetables, making rice, cleaning up and observing a master chef before they even begin to serve customers.

This reflects the discipline, commitment, and focus on mindfulness and experiential learning that underscore the high level of craftsmanship in Japanese society.

The American movie “The Karate Kid” (1984) provides a great example of Japanese-style intuitive learning. Miyagi, the teacher, laughs when his student Daniel tells him he is learning karate from a book — because this would be only intellectual learning. Instead, the teacher makes Daniel perform repeated manual tasks such as painting fences or sanding floors. A scene from the 1984 film “The Karate Kid.” The character Daniel, right, had to do a lot of painting and sanding before he was allowed to throw a punch at his sensei.   © Getty Images

These teach Daniel important defensive blocking techniques in karate, which he learns through his body as well as his mind. Miyagi never tells Daniel why he is doing these chores. As an American, Daniel is quite angry until Miyagi explains to him what he has learned.

Daniel’s experience was echoed in the 1980 movie, “Star Wars: The Empire Strikes Back,” when the Jedi Knight Yoda tells Luke Skywalker that a Jedi should use the Force only for knowledge and defense, never for attack. Luke asks, “But tell me why I can’t … ?” But Yoda cuts him off, saying: “No, no, there is no ‘why.’ … Clear your mind of questions.”

Luke was trying to understand cognitively what needed to be understood intuitively. This also chimes with the approach to learning championed by Suzuki, who once said that “Zen upholds intuition against intellectualism, for intuition is the more direct way of reaching the truth.”

Japanese intuitive learning is difficult to grasp at first for linear-thinking Westerners. But a good way to understand this Japanese concept of learning through experience lies in a classic quote from the 17th century haiku master Matsuo Basho, who wrote: “Do not seek to follow in the footsteps of the wise. Seek what they sought.” Seventeenth century Japanese haiku master Matsuo Basho once wrote: “Do not seek to follow in the footsteps of the wise. Seek what they sought.”    © Getty Images

I may never become a Demon Slayer, or even an accomplished aikido practitioner, but I have gained useful insights from my exposure to Japanese intuitive learning, and have come to appreciate the emphasis in Japanese culture on the pursuit of excellence and learning by doing.

Experiential learning requires clearing the mind and remaining aware of every experience. This practice of developing mindfulness also serves as a wonderful antidote to the technological devices and distractions of the modern world, and I have learned to find clarity of thought and gain insights into difficult issues by relying on my inner voice as much as on my analytical thinking.

Author: Richard Conrad is based in Japan and is the author of “Culture Hacks — Deciphering Differences in American, Chinese, and Japanese Thinking.”