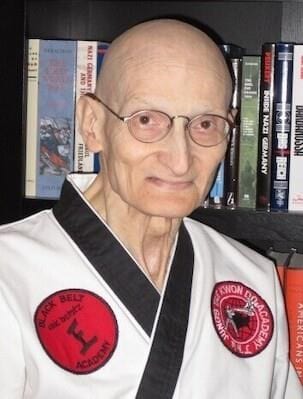 He was born in Waterloo, IA, on July 13, 1945, but grew up in Burlington, IA. He graduated from Notre Dame (Burlington) High School in 1963 before marrying classmate Sharon Eastin; they were married for seven years and had a son, Eric. Tetsugen attended the University of Iowa and graduated from U of I Law School in 1971, after which he began a private practice in Iowa City with Sharon Mellon; they were married for five years and had a son, Will. In 1978 he moved to Des Moines to become an assistant attorney general under Iowa A.G. Tom Miller, before being named general counsel to the Iowa Department of Transportation. In 1984, after years of training in martial arts, he left law practice and opened the Eric Heintz Black Belt Academy, which he owned and operated until his retirement for health reasons in 1995, training thousands of students over that time. His black belts continue to teach in schools and clubs in the greater Des Moines area. He was an avid endurance athlete and regularly raised money for Amanda the Panda Center for Grieving Children by breaking thousands of boards over the course of a single day. In addition to his 6th-degree black belt rank in Tae Kwon Do, he also attained a 3rd-degree black belt in the Korean sword art of Kum Do. He was a dedicated practitioner and student of Zen Buddhism, and was ordained as a Zen priest in 1999. Students and family appreciated his wit, intelligence, and dedication to work. He had a rare ability to work with students of all ages, sizes, abilities, and cultural backgrounds. It was very important to him that everyone who entered his school felt welcome and had an opportunity to train. His favorite activities included collecting books, scholarly studies in the areas of history and Buddhism, bird watching, listening to music, and spending time with family and cats.

Tetsugen is survived by his wife of over forty years, Kaye Bair, also of Burnsville; his children, Eric Heintz (Gina Mastroluca) of Portland, ME, Christine Searson (Michael), of Apple Valley, MN, and Brent Bair (Kristi), of Prior Lake, MN; his five grandchildren, Connor and Kayla Bair, Cody and Cieran Searson, and Sophia Heintz Mastroluca; a sister, Kristin Davis of Prairie du Chien, WI, and brother, Kurt Heintz, of Seattle, WA.

He was preceded in death by his son, William Mellon Heintz, of Portland, OR; his parents, James and Helen Heintz, of Palatine, IL; and a sister, Joan Eck, of Virginia Beach, VA.

Cremation will take place at Crescent Tide Cremation Services in St. Paul on Nov 16th at 2 pm. A small family gathering is tentatively planned for next summer. Donations can be made to C&W Rustic Hollow Cat Shelter in Nashua, IA, and the Animal Rescue League.

To Plant Memorial Trees in memory, please visit our Sympathy Store.
Published in the Des Moines Register from Nov. 12 to Nov. 15, 2020.