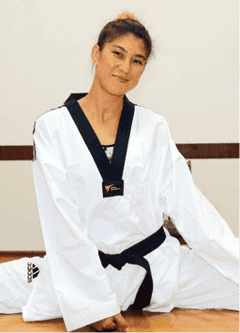 Police in Uzbekistan dropped a criminal case against a young woman who beat up two men in response to verbal abuse, after a number of public figures including President Shavkat Mirziyoyev’s daughter spoke out in her support.

Local websites showed a video of Gulsanam Alijonova, 23, who has trained in boxing, karate and taekwondo, in which she chased and beat two men aged 30 and 33.

The video, shot in June, was shared and discussed on social media, but on Sept. 8 the Interior Ministry said it had identified the woman and launched a criminal case against her for hooliganism.

The following day, local news website Daryo ran an interview with Alijonova who said the conflict started when one of the two men ridiculed her T-shirt and shorts outfit and went on to insult her when she rebuked him.

Alijonova said the man grabbed her T-shirt when she confronted him, prompting her to employ her fighting skills, and his companion tried to intervene.

A number of bloggers and public figures, including Saida Mirziyoyeva, the influential elder daughter of the president, criticised the move to prosecute Alijonova, contrasting it with a lenient attitude shown in the former Soviet republic towards domestic violence committed by men against women.