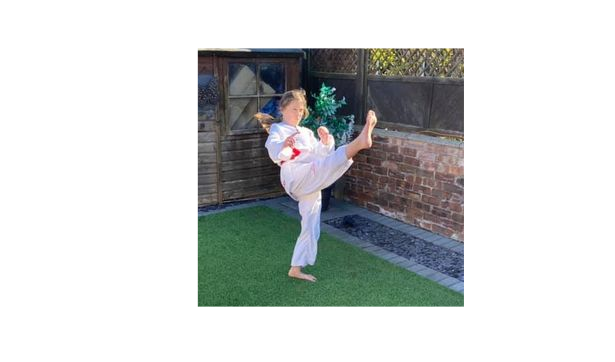 An 11-year-old girl in Grimsby, England is raising money for the NHS by doing taekwondo kicks across the length of her garden for ten days.

Liliana Herbert was originally inspired by Captain Tom Moore as he walked around his garden to raise almost £30 million for the NHS.

Wanting to do her part, Liliana, also known as Lil, decided to follow in Captain Tom’s footsteps, but put her own twist on it and include her love for taekwondo in the fundraiser.

Starting on Friday April 17, Lil originally decided to do 72 lengths of her garden every day doing different taekwondo kicks, setting a target of £500. But, when she already met her target in a couple of days, she decided to up her challenge, taking it to 100 lengths a day. After working it out, she will be covering more than four miles over the entire fundraiser, which finished on Sunday, April 26. Liliana has raised £764 on her JustGiving page, which will go to NHS Charities Together.

Liliana trains with Humberside Tae Kwon-do, and is currently a red belt and a world champion in the sport for under 14s, winning in a team event with another member of the same club.

Speaking about her fundraiser, Liliana said: “I was inspired by the old man who is 99-years-old who was doing laps around his garden for the NHS.

“So I thought I’d do something similar but with taekwondo and also raise some money as well.

“I’m amazed at how much we have made, I didn’t think we’d get over £100. Thank you to everyone that has donated.

“It’s really good to do and I enjoyed it, but my legs do hurt a bit afterwards. It’s worth it for a good cause like this though!”

Liliana’s mum, Laura Herbert, added: “She is part of a group that does taekwondo. With everything going on at the moment with coronavirus and the lockdown, she wanted to do something for the NHS.

“She was inspired by Captain Tom Moore and his walks across the garden for the NHS, so she decided to do taekwondo kicks across her garden to put her own spin on it.

“She originally set out to do 72 lengths a day, equalling out at around three miles, but with hitting the target in a couple of days, she upped her challenge to 100.

“That’s going to be the equivalent of four miles worth of kicks, which is a big ask for an 11-year-old!