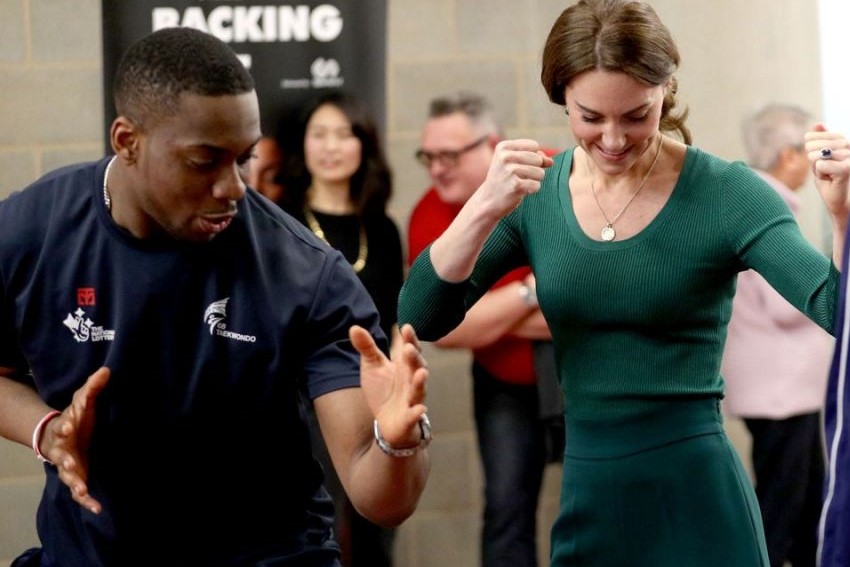 You might not think of Kate Middleton, Duchess of Cambridge (and former field hockey player) as someone ready—even eager!—to throw a punch. But at an event in London, she did just that, and the world-famous royal showed some pretty good form while doing it. Middleton was at London Stadium to show her support for SportsAid, a UK charity focused on young athletes—the day was dedicated to the parents and guardians who do so much to help them succeed. Middleton has been a patron of the charity since 2013, and has previously attended several of its events.

This time, she offered some inspiring words to those parents and guardians, saying, “For all of you here, you go, and have gone, above and beyond the call of duty; you’ve committed your time and devotion to nurturing your children’s exceptional talents.”

Taekwondo, judo and laser shooting – which features in modern pentathlon – are all on display here at the @LondonStadium. The Duchess is watching the sports in action and has just been given a short tutorial by Lutalo Muhammad on how to complete a reverse punch! She also wasn’t afraid to get a little sporty herself. She watched a taekwondo demonstration from Lutalo, who’s won both silver and bronze medals in the Summer Olympics, and full-contact fighter Mia Pachansky. Muhammad showed her how to throw a reverse punch, setting her feet and punching through her (imaginary) opponent. The Duchess was game, throwing a solid right before laughing as the crowd applauded. The Duchess is being given an in-depth introduction to track and field as she learns more about the starting blocks, including the differences for para athletes, with coach Coral Nourrice, Jessica Ennis-Hill, Danny Sidbury and Emmanuel Oyinbo-Coker! Middleton also got down  with the athletes, and  wheelchair racer Danny Sidbury. All in all, the Duchess looked to be having a great time supporting a cause she believes in.

“You may not always feel appreciated,” she said to the parents and guardians, “or sometimes even noticed on the sidelines, in the car park or sitting high in the stands, but I am so proud that SportAid recognizes how key your role is and that they understand the challenges and worries you face.”