WUSHU CLUB IN ITS ELEMENT WITH TV-INSPIRED DEMO 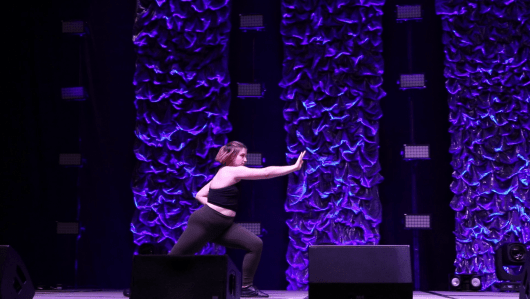 Students from the Dragon Phoenix Wushu team performed in front of roughly 1,000 people in the Hyatt Regency Ballroom during the 20th-annual Ohayocon anime convention Saturday. The performance featured live demonstrations of martial arts styles and techniques that inspired the Nickelodeon series “Avatar: The Last Airbender.”

“Directly translated, ‘wushu’ just means the Chinese martial arts, but you probably know it as kung fu,” Natalie Lucas, a third-year in neuroscience and wushu club vice president, said during the panel.

“Avatar: The Last Airbender” is an American-made animated series that draws heavily from Chinese martial arts and imagery, with an art style similar to Japanese anime. The show follows the titular Avatar, Aang, the only person capable of controlling water, earth, fire and air, as he tries to bring peace across the four nations of the world. Each of the elements is controlled using a different form of kung fu, which were each demonstrated in the performance.

The panel began with a performance set to the show’s opening theme song. Then, club members took turns demonstrating their wushu and weapon skills while educating the audience on the traditional martial art. Featured weapons included spears, fans and straight swords.

Lucas said this was her first time organizing and hosting a panel for the con, but she has been attending Ohayocon since age 12. She said watching “Avatar: The Last Airbender” when she was 13 initially inspired her to pursue martial arts, and the idea for the panel came from wanting to merge two of her interests.

After spending three years learning Northern Shaolin kung fu before coming to Ohio State, Lucas said she found that the wushu club was the only kung fu club the university offered. She said she has been in the club since her first year.

“We were all really nervous when people started filing in, but in the end, this is a performative martial art, and we’re here because we love putting on a show for people,” Lucas said. After the panel, Lucas walked the con floor cosplaying Suki, a fan-wielding character from the show. Thomas Bozzi, a third-year in aerospace engineering and the club’s president, said that compared with other performances, nearly every club member was able to participate in some way at Ohayocon. He added that he was happy to see so many members getting involved.

“This is definitely the largest crowd we’ve had, by far,” Bozzi said. “Hopefully we can come back next year.”

Bozzi said that when coming to Ohio State and looking for clubs to join, he wanted to try a new martial art that is performance-based instead of ones that are more practical.

Lucas said wushu has kept her sane as she faces stress from her STEM major. She said many of her closest friends at the university are on the team, and she always has the club to center herself and exercise both her body and mind.

Dragon Phoenix Wushu meets from 7 to 9 p.m. every Monday, Wednesday and Friday in the RPAC Multipurpose Room 3.

Wushu club in its element with TV-inspired demo