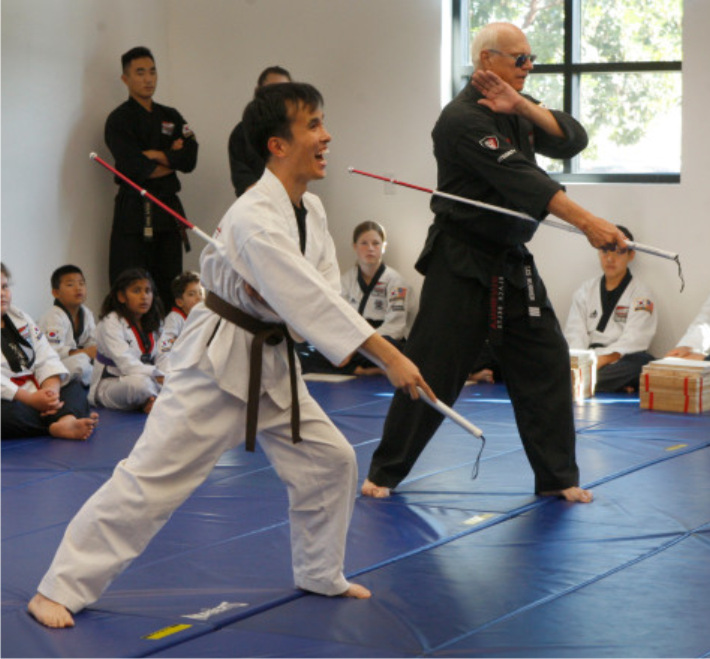 For 13 years, Lester Hubner has trained in taekwondo with Grand Master Sung Yang, earning a 3rd degree black belt and became an assistant instructor for the class. “You just cannot believe the feeling that someone like me gets from having people around them that they can help,” Hubner said. “When I’m out there, I’m asking for help. When I’m here, I’m not asking for anything.” Hubner trains in the martial art at the Braille Institute in Anaheim. Every Friday, Hubner boards a bus from his home in Huntington Beach, exits on Beach Boulevard near Knott’s Berry Farm walks 20 minutes to the Braille Institute, which offers a variety of programs and classes for people who are blind or visually impaired. Hubner, 72, is able to see out about 20 feet in front of him, while most people can see about 200 feet. That feeling of empowerment derived from learning taekwondo is a main reason the martial arts class is the most popular of all the activities offered at the institute. Yang, who owns the Shambhala Martial Arts Center in Brea, started the taekwondo classes at the Braille Institute 18 years ago and said he was immediately inspired by his students’ effort. “They challenge themselves,” Yang said. “That  is why I respect them.” The class is free, as are all the services and classes offered at the Braille Institute. “I’ve seen people just blossom in this class,” said Donna Wager, the volunteer services manager at the institute. “They carry themselves in a more confident manner. I think that it makes them less vulnerable. They learn spatial awareness, balance and coordination. The students, which number about 40 and include a woman in her 80s,  also walk away with an understanding of the philosophies of taekwondo. Those include interpersonal communication skills, deeper self-awareness, self-discipline and ability to influence others. They not only learn the taekwondo skills, and taekwondo philosophies, but the ability to inspire other people. Student David Yohan Chung, 27, said he has been making the trek to the class from Koreatown in Los Angeles for seven years, because he wanted to be taught by a grand master. “Taekwondo is a sport for which we Koreans are very proud,” said Chung, who holds a brown belt. “In Korea, there are not many grand masters who are willing to teach visually impaired students how to do taekwondo. I think one of the biggest blessings of the class is (becoming) more confident in my abilities and conquering some of the  challenges that visually impaired people have. They’re willing to teach you something that nobody else will teach you, and in a comfortable atmosphere,” Hubner said. “They do everything here to make it so safe. I’ve been doing this for so long, not because I have to, but because I can’t wait to.” 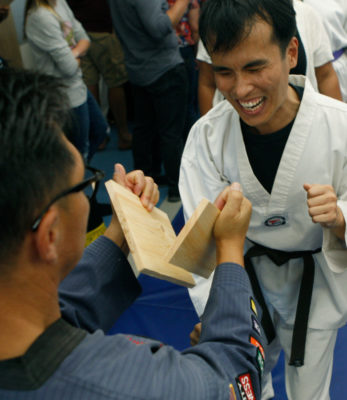 Blind student, David Chung, 25, is all smiles after he broke his board during the 8th annual Shambhala Festival held at the Orange County Braille Institute. The event featured demonstrations by both sighted and blind students. Grand Master, Sung Wook Yang, holds his board. 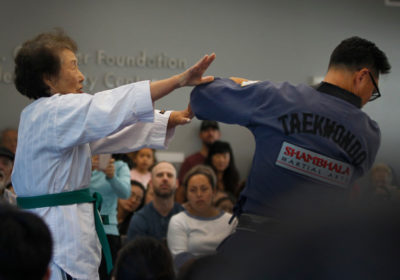