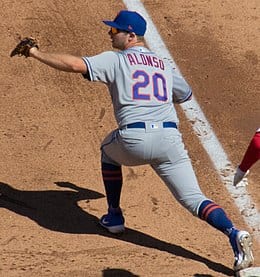 There is a lot more working for Pete Alonso than brute strength. His picture perfect swing has launched him to the major league home run lead with 45. Growing up, Alonso said he studied taekwondo, the art of unarmed self-defense characterized by the use of kicks, and he believes that has helped him become the gifted ballplayer he has developed into in his rookie season. It really helps with plays at first base where he has shown the ability to hang onto the bag on wide throws just long enough to get the out and saving infielders from throwing errors. Alonso has one of the longest stretches in the game and catches throws far out in front of the bag. The 6-foot-3, 245-pounder has mastered the split at first base to get runners out by the slimmest of margins. When asked about his ability to snare throws, Alonso revealed the deeper skill set. “When I was younger I used to take taekwondo,’’ Alonso told The Post. “If baseball didn’t get in the way, I probably would have been a really advanced black belt. I was really good.’’ Alonso then said: “If I told you I can do a 180 split, would you believe me?’’ Alonso, who came into the majors with a reputation of being a poor defender but has proven to be one of the best first basemen in terms of receiving throws and making those stretches where he balances himself on the edge of the base. He credits his early taekwondo training for that ability. “That’s been a big part,’’ Alonso said. “Just staying flexible and as balanced as possible.’’ After what Alonso has accomplished in the first 139 games of the Mets season, anything is possible.