The Man, the Myth, the Legend: General Choi Hong Hi, Father of TaeKwon-Do 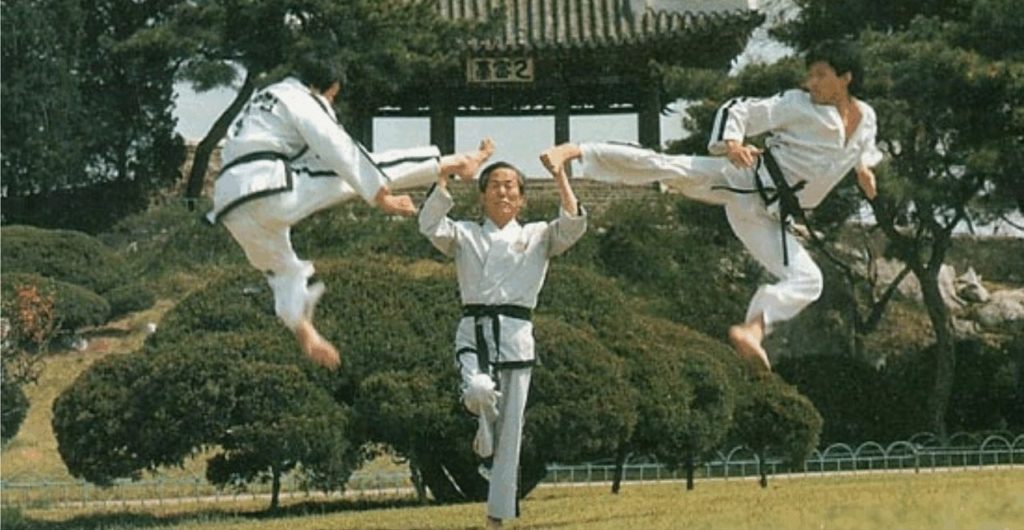 On November 9, 1918, under the lunar calendar a boy was born who was named Choi Hong-Hi. This birth took place in the northeastern part of Korea, which was then already under a couple of decades of colonial occupation by Imperial Japan. Few know this, but the November 9th date on the lunar calendar converts to December 22 on the Western calendar. However, when Choi Hong-Hi would later move to Toronto, Canada, he kept November 9th as the day he would celebrate his birthday.

Choi Hong-Hi would grow up shaped by the terrible treatment Koreans suffered under the brutal control of the Empire of Japan. After being forcefully conscripted to serve in the Imperial Army, he and other Korean student soldiers plotted to overtake the local colonial authorities and join the Korean Resistance Army. However, their plan was uncovered when they were turned in by a Korean collaborator. When WWII ended in August 1945, Choi was released from prison and moved south to join the growing democracy movement taking hold in Seoul. In January of 1946 he joined what would be the first Korean Army Military Academy. 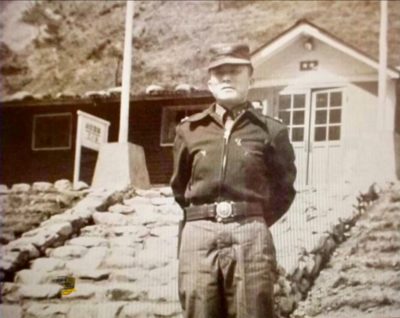 A young Lt. Choi graduated, and as a company commander, he started to teach martial arts to the soldiers under his command. The newly commissioned officer, with army serial #44, would quickly rise up the ranks of a two-star major general. After being elevated to ambassador, his military career ended, but he would forever be known as “General Choi,” a founding member of the ROK Army. 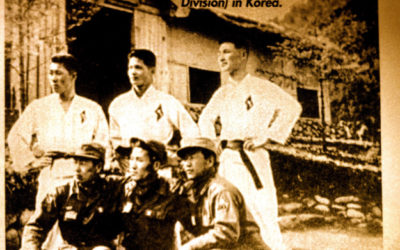 Base Camp of the 29th Infantry Division(TaeKwon-Do Devision) in Korea.

During his tenure of service to South Korea, he was able to create a new Korean martial art of self-defense that centered around patterns that he designed. These new patterns were named after great Korean patriots, important events and themes in Korean history and culture. As a result, a newly independent and free Korea was able to reinvigorate Korean national pride and restore parts of Korea’s proud past that had been the subject of eradication efforts by the former imperial colonial rulers. Naturally, these patterns and new Korean art became very popular. 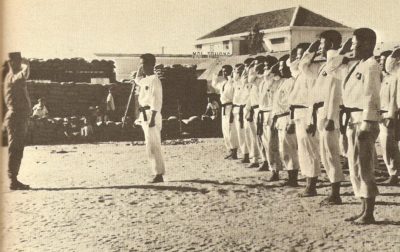 General Choi called his new art “Taekwon-Do.” He named it in 1955, and obtained official presidential authorization as the name of the Korean martial art from the first ROK President, Dr. SeungMan Rhee. 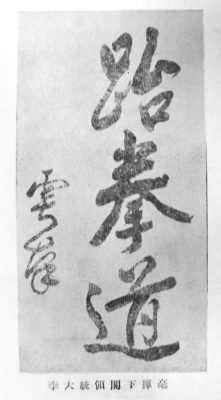 1955 Tae Kwon Do name written in Chinese Calligraphy by the ROK President Rhee.

This original Tae Kwon Do began as military Tae Kwon Do. When it spread to the civilian side, the leaders there concentrated on a sport focus. It was General Choi who had the vision to spread his traditional Taekwon-Do internationally. His efforts began in 1959 and continued until he passed from this world in 2002.

After increased tensions caused by his outspoken political opposition to dictator General Park Chung-Hee grew, Gen. Choi eventually sought refuge in Canada. He fled for his safety in 1972, which was the height of the brutality of the Park regime. He then relocated the International Taekwon-Do Federation, (ITF), to Toronto, after forming it six years earlier in Seoul, Korea, on March 22, 1966. Having the new ITF headquarters in North America would also help facilitate his global expansion of Taekwon- Do. A year later, in 1973, the South Korean officials responded by creating a new rival Tae Kwon Do sports organization, called the World Taekwondo Federation (WTF). They also blacklisted General Choi and any Korean instructors who stayed loyal to the principal founder of the original Taekwon-Do. This resulted in a permanent split in Tae Kwon Do. 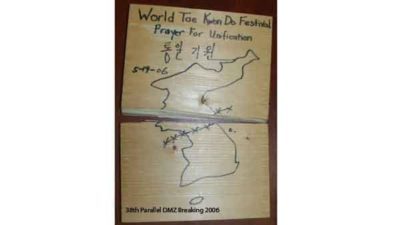 Since this coincided with the Cold War era, South Korea was unable to spread its sport version of Tae Kwon Do to the community and socialist bloc countries. However, the ITF was an independent international martial art organization. As such, it led the way into Eastern Europe. This led to slanderous accusations of General Choi’s being a communist sympathizer. When he took the brave and unprecedented move to introduce Taekwon-Do to North Korea in 1980, his enemies then were able to label him as a traitor engaged in a treasonous act by taking his art to the part of Korea that was still technically in a state of war.

This controversial move helped bolster a shrinking ITF, as it provided General Choi with a new army of Korean instructors that would help him continue worldwide expansion of Taekwon-Do. North Korea was especially helpful in introducing Taekwon-Do to the former Soviet Union, Red China and Central Asia. When the Cold War ended with the collapse of the U.S.S.R. and the fall the Iron Curtain dividing Europe, the WTF was able to quickly move in and co-opt many of the ITF stylists. This resulted in the WTF’s obtaining official Olympic sport status just a few years later, as Tae Kwon Do was now truly an international martial art and sport.

As the relations between the two halves of Korea warmed, steps toward using Tae Kwon Do as a soft diplomatic tool to help foster better relationships increased. Sadly, General Choi did not live to see the progress that has taken place so far. History must note that he brought Koreans from the south and north together for first time in 1980. He also fielded the first unified Korean Tae Kwon Do demonstration team, made up of both south and north Koreans, in 1981. In fact, it was the ITF and the WTF that made the historic 2018 Winter Olympics that his Excellency, President Moon Jae-In called the “Peace Olympics.” Leaders from both federations proposed the idea at the 2017 WTF World Championships in MuJu, (South) Korea, at which the ITF demonstration team performed for the presidents of both the ROK and the IOC. 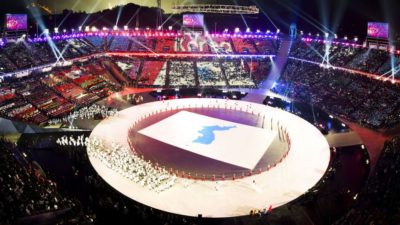 During this time of the year, when the Tae Kwon Do world remembers the 100th birthday of the man who gave us Tae Kwon Do, please also think about his great contributions. No matter the style or system of Tae Kwon Do you train, thank him for the name of the art that you practice and that he conceived for the entire world. Remember that it was General Choi who started the spread of this art all over the planet. So chances are, the roots of what you are doing have some connection to him or his dedicated team. Finally, it is important to realize that his efforts to introduce it to the half the world under Soviet domination fast tracked its entry into the Olympics.

In South Korea today, more average, everyday Koreans are coming to understand not only Choi’s global impact with Tae Kwon Do but his patriotic efforts in resisting the Japanese occupation. Very few Koreans hold this special distinction, as a result of his involvement with the Pyongyang Student Soldiers Movement, which almost cost him his life. Koreans today, on both sides of the artificial and tragic divide, are coming to understand his undying efforts toward a peaceful reunification of his beloved homeland. His final, or highest, black belt pattern, practiced by 5th-dan holders and above, is called Tong- Il, which means “reunification” (of Korea).

General Choi lived exactly 27 years in the northern half of Korea, when it was still a unified Korea, albeit under colonial occupation. After he was released from Japanese prison following the war, he moved south and lived there for the same number of years. After fleeing to escape political persecution and becoming a beloved adopted son of Canada, the country that nominated him for the Nobel Peace Prize, he dedicated his life to not only Tae Kwon Do but also bringing his homeland together again. Grandmaster Jung Woo-Jin, CEO and publisher of TKD Times, has nicknamed him “the Nelson Mandela of Korea.” Sadly, General Choi’s dying wish to be buried in a military cemetery in South Korea was turned down, reportedly by Tae Kwon Do leaders in Seoul with influence in the government structure. The Korean Taekwon-Do Committee in Pyongyang, aided by Koreans on the United Nations staff in New York, did obtain for General Choi a burial place on Korean soil in a national cemetery for patriotic Koreans who resisted the Japanese colonial occupation.

Perhaps no other Korean name is more well known around the world, and no one has done more to educate foreigners about Korea, with its long and proud history. General Choi did this through his 24 Korean Taekwon-Do patterns. Each of these patterns teaches students about Korea. The patterns’ historical definitions that he wrote have been translated into well over a dozen languages. It is most fitting that his Tae Kwon Do is leading the way towards reconciliation on the Korean Peninsula. All Koreans and every Tae Kwon Do student should pause a moment, reflect on his life that he dedicated towards these honorable causes, then thankand wish him well on his 100th birthday.

General Choi’s stated ultimate goal of his Taekwon-Do is: I shall build a more peaceful world