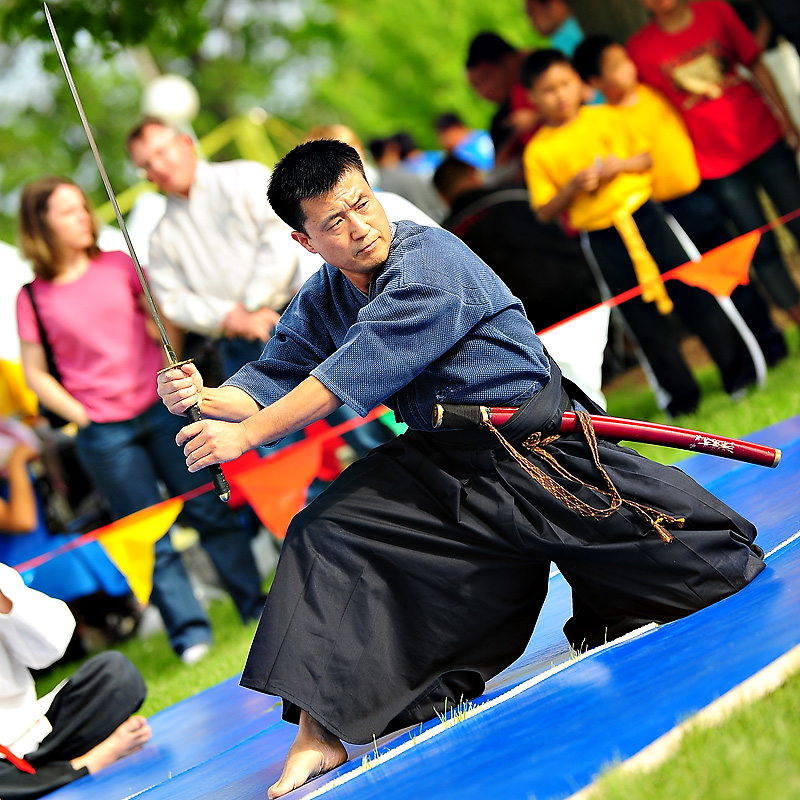 Kuhapdo is a Korean sword art related to the Japanese art of Iaido, where the practitioner emphasizes control, grace and harmony. The art begins from a kneeling or sitting position and includes the proper way to draw the sword, strike or cut the enemy, and finally complete the movement by returning the sword to its sheath and returning to a peaceful sitting state. Kuhapdo is not in any way related to western fencing. Rather the sword remains sheathed until it is necessary to be drawn. Kuhap stands for a cutting act while standing up from a sitting posture. This Korean sword art is influenced by the Japanese Iaido, which is a term that appears for the first time in 1932 and consists of the kanji characters 居 (i), 合 (ai), and 道 (dō). The origin of the first two characters, iai (居合), is believed to come from saying Tsune ni ite, kyū ni awasu (常に居て、急に合わす), that can be roughly translated as “being constantly (prepared), match/meet (the opposition) immediately”. Thus the primary emphasis in ‘iai’ is on the psychological state of being present (居). The secondary emphasis is on drawing the sword and responding to the sudden attack as quickly as possible (合). The last character, 道, is generally translated into English as the way. The term “iaido” approximately translates into English as “the way of mental presence and immediate reaction” and was popularized by Nakayama Hakudo. The term “Do” emerged from the general trend to replace the suffix -jutsu (術) (“the art of”) with -dō (道) in Japanese martial arts in order to emphasize the philosophical or spiritual aspects of the practice.

In Kuhapdo, the sword is always kept in the sword case, right up until the moment it is needed for use. This respect to the sword’s power does not permit the misuse of the sword. An essential quality of Kuhapdo training is to reach the true spirit of swordsmanship by developing a good personality and politeness towards others. Kuhapdo emphasizes an inward mental expression, not an outside looking expression and believes that it is necessary to take a serious view on courtesy in order to truly understand how to use sword in a right way.

Kuhapdo, like Iaido encompasses hundreds of styles of swordsmanship, all of which subscribe to non-combative aims and purposes. Iaido is an intrinsic form of Japanese modern budo, the “martial way” or “way of war”. This form of swordsmanship is a reflection of the morals of the classical warrior and the goal to build a spiritually harmonious person possessed of high intellect, sensitivity, and resolute will. Kuhapdo and Iaido is for the most part performed solo during kata/forms, executing changed strategies against single or various imagined opponents. Every form starts and finishes with the sword sheathed.

The metaphysical aspects in this form of swordsmanship have been influenced by several philosophical and religious directions. This is a blend of the ethics of Confucianism, methods of Zen, the philosophical Taoism, the purificatory rites of Shintoism and aspects from bushido. These blended traditions make for a well-rounded person and martial artist.