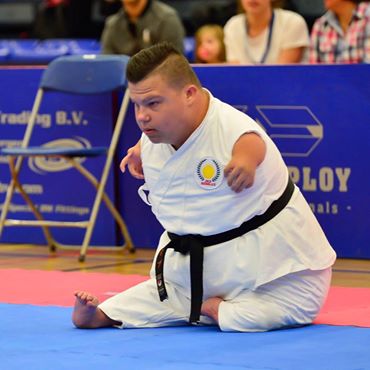 Dave KenGen suffered from heart disease when he was very young that resulted in his hands and legs not developing normally. Karate has helped this 15-year-old Dutch boy overcome the pain of his disabilities and showcase his abilities.

David started learning Karate at the age of 7, Dave KenGen loved this sport. With his untiring training efforts, the Dutch youth has reached a level many would think impossible.

The Japanese admired the passion of Dave for Karate. Subsequently, Dave was invited to perform at the JKA World Karate-do Championship in 2014.

The disabled youth made the spectators in the Japanese theater feel moved to tears with his performance from the heart.

There are many disabled athletes who competed in the Olympics.

South Korean archer Im Dong Hyun, who has 10 percent vision in his left eye and 20 percent his right, set the first world record of the 2012 Games, and his team eventually won bronze. Polish table tennis player Natalia Partyka, who was born without a right hand or forearm, and is appearing in her second consecutive Olympic Games.

This amazing young man is an inspiration to us all.

Posted by Karate Do Tsiroanomandidy on Sunday, April 21, 2019