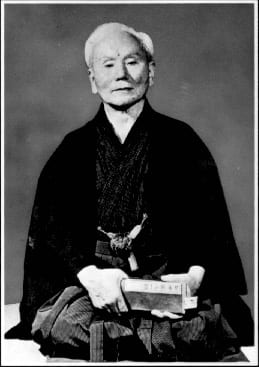 Today we honor the passing anniversary of one of the world’s greatest martial arts Masters and teachers, Gichin Funakoshi who lived from November 10, 1868 – April 26, 1957. Grandmaster Funakoshi is the founder of Shotokan Karate-Do, perhaps the most widely known style of karate, and is known as a “father of modern karate”. Following the teachings of Anko Itosu and Anko Asato, he was one of the Okinawan karate masters who introduced karate to the Japanese mainland in 1922. He taught karate at various Japanese universities and became honorary head of the Japan Karate Association upon its establishment in 1949.
Gichin Funakoshi was born on November 10, 1868, the year of the Meiji Restoration, in Shuri, Okinawa, to a low-rank Ryūkyūan Pechin. He originally had the family name Tominakoshi. After entering primary school, he became close friends with the son of Ankō Asato, a karate and Jigen-ryū master who would soon become his first karate teacher. Funakoshi’s family was stiffly opposed to the Meiji government’s abolition of the Japanese topknot, and this meant that he would be ineligible to pursue his goal of attending medical school (where topknots were banned), despite having passed the entrance examination. Being trained in both classical Chinese and Japanese philosophies and teachings, Funakoshi became an assistant teacher in Okinawa. During this time, his relations with the Asato family grew and he began nightly travels to the Asato family residence to receive karate instruction from Ankō Asato. 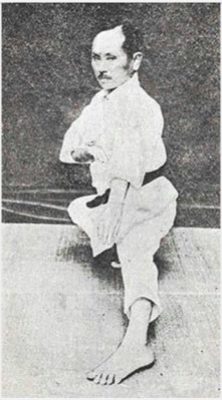 Funakoshi had trained in both of the popular styles of Okinawan karate of the time: Shōrei-ryū and Shōrin-ryū. Shotokan is named after Funakoshi’s pen name, Shōtō (松濤), which means “waving pines”. Kan means training hall or house, thus Shōtōkan (松濤館) referred to the “house of Shōtō”. This name was coined by Funakoshi’s students when they posted a sign above the entrance of the hall at which Funakoshi taught. In addition to being a karate master, Funakoshi was an avid poet and philosopher who would reportedly go for long walks in the forest where he would meditate and write his poetry.
Between 1910-1936 Funakoshi would do much to unite and increase the exchange of knowledge between Karate-Do practitioners and Masters, creating multiple associations of which still exist to this day as keepers of Grandmaster Funakoshi’s martial arts lineage.
In 1936, Funakoshi built the first Shōtōkan dojo in Tokyo. While on the Japanese mainland, he changed the written characters of karate to mean “empty hand” (空手) instead of “China hand” (唐手) to downplay its connection to Chinese boxing. Karate had borrowed many aspects from Chinese boxing. Funakoshi also argued in his autobiography that a philosophical evaluation of the use of “empty” seemed to fit as it implied a way which was not tethered to any other physical object. Funakoshi’s re-interpretation of the character kara in karate to mean “empty” (空) rather than “Chinese” (唐) caused some tension with traditionalists back in Okinawa, prompting Funakoshi to remain in Tokyo indefinitely. 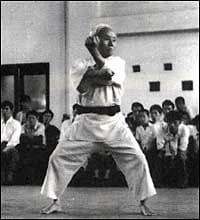 Funakoshi published several books on karate including his autobiography, Karate-Do: My Way of Life. His legacy, however, rests in a document containing his philosophies of karate training now referred to as the niju kun, or “twenty principles”. These rules are the premise of training for all Shotokan practitioners and are published in a work titled The Twenty Guiding Principles of Karate. Within this book, Funakoshi lays out 20 rules by which students of karate are urged to abide in an effort to “become better human beings”. Funakoshi’s Karate-Do Kyohan “The Master Text” remains his most detailed publication, containing sections on history, basics, kata, and kumite. The famous Shotokan Tiger by Hoan adorns the hardback cover.
Join our community and subscribe to get exposed to Legendary Martial Arts Masters around the world: https://taekwondotimes.com/subscriptions/
For more information and to keep up with the latest Taekwondo Times News follow us on social media and check out our website at:
www.Taekwondotimes.com
www.Facebook.com/TKDtimesMagazine
www.Instagram.com/Taekwondo.Times
Some information acquired at:
https://en.wikipedia.org/wiki/Gichin_Funakoshi