2nd Place Finish for Kukkiwon, Is Still a Win 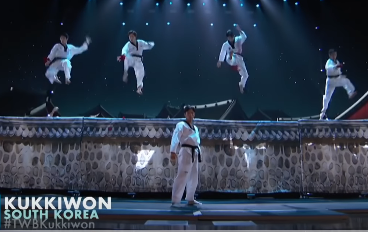 Kukkiwon, which had been suffering from scandals embroiling the leadership, has been demoralized, and the demonstration team quietly announced the return of Taekwondo excellence.
The Kukkiwon Taekwondo demonstration team (director Park Jin-soo) has recently achieved a valuable moral victory as a runner-up in the US CBS program The World’s Best
In the first-of-its-kind talent competition CBS has created a talent show featuring acts from all over the world and a variety of genres. 50 of the world’s most talented experts from dissimilar fields of entertainment showcased their talents. In the end, one act dominated and was ultimately crowned “The world’s Best.” Kukkiwon said, “The runners-up of the demonstration team is a priceless achievement through competition with famous performers from all over the world, and was an opportunity to demonstrate the excellence of Taekwondo demonstration performance.”
The demonstration team advanced to the second battleround with a score of 99 out of 100 in the first round (audition). In the second and third rounds of the championships they bested competitors from all over the world and advanced to the final.
In the semi-finals, with a set reminiscent of Deoksugung Palace stone walls, Kukkiwon performers appeared out of nowhere leaping over walls. It was obvious the judges were in awe of the performance from the shots of their faces. In the final minute blindfolded performers were led out by a compatriot ringing a bell. This served to heighten the mystery and piqued the judges interest of what would come next. Still blindfolded and only using the sound of the bells their board holders were ringing; 4 performers crossed the stage to execute their next breaks. The best was yet to come. 7 boards were held about 9 feet off the ground and 1 man was lofted into the air, breaking all 7 with a flipping technique.
At the end of the contest, three professional judges Drew Barrymore, Rupaul Andre Charles and Faith Hill sent a standing ovation with an expression of awe. The finale was filled more acrobatic, rapid fire breaking techniques, Some up to 12 feet in the air. At one point South Africa’s TATS NKONZO (comedian) of the foreign professional judges even cried “KUKKIWON”.
A second place finish while disappointing to the competitors, is a great accomplishment considering the level of competition. Kukkiwon said, “We have competed in the top of the championship, we reaffirmed that Korea is promoting Taekwondo to the world and to the US, as well as showcasing the Taekwondo demonstration team of Kukkiwon.”