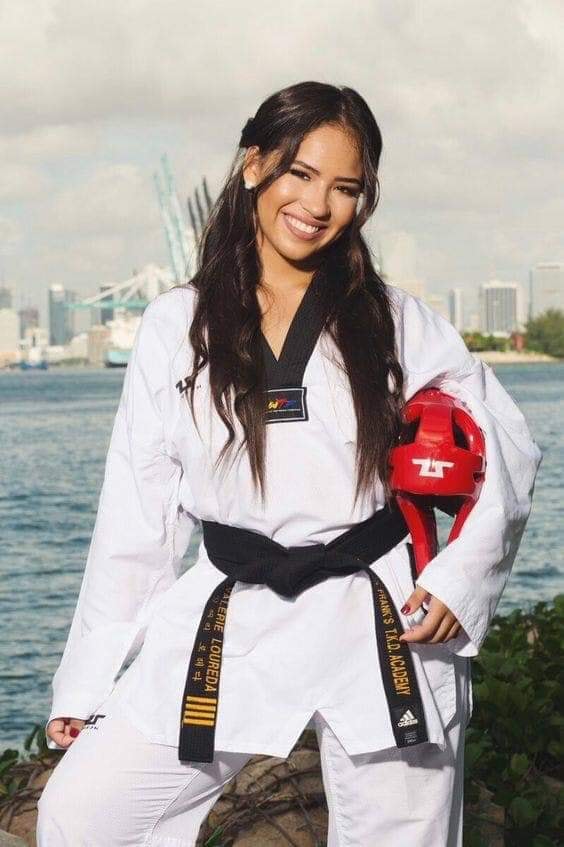 In women’s MMA on Saturday night, Valerie Loureda impressed in her debut win at Bellator 216, becoming an instant crowd favorite with fight fans.

The 20-year-old Florida native’s 1st professional bout did not disappoint as she scored a first-round TKO win over Colby Fletcher in their flyweight bout at the Mohegan Sun Arena in Uncasville, Connecticut.

The Taekwondo master set up a roundhouse kick to the body with a barrage of unblocked punches before sealing victory with a fusilaid of hammer fists. Loureda was wearing her Taekwondo dobok in honor to her martial arts beginnings and the role the sport has had in her formation as an MMA fighter.

Loureda has grown up practicing Taekwondo, and her father has been passing on his expertise as owner of Master Frank’s Taekwondo Academy in Miami for more than three decades. Loureda holds a 4th dan Taekwando black belt, and was a member of the U.S. Olympic team. Her father trained her in what she characterizes as a very traditional style. Her dedication has paid off as she progressed up the ranks of Taekwondo.

When Taekwondo evolved into point a point sparring style, Loureda says it was going away from her roots. I fought in the world championship and then I fought in a President’s Cup, and honestly, I kicked a girl, broke her rib, and I wanted to mount her, even though I’d never done MMA before.

Loureda commitment paid off with a Bellator deal. After three fights as an amateur, she made her professional debut.

She has trained three or four times a day for the past two years. She has enrolled in online college courses so that she can devote more time to training.

The first time she stepped into the cage she was so comfortable, she knew that this was what was meant for her life. She couldn’t be happier with this choice, and knows that big things will happen with Bellator.

Currently training at American Top Team she’s become more accustomed to the complete MMA game. she’s found opportunities to let her Taekwondo skills shine, while that wasn’t the case in her initial transition to the sport but since changing gyms she’s much happier.

As a lifelong martial artist who transitioned to MMA and brought the essence of his family’s karate to a new sport, he’s excited to see Valerie bring her world-class Taekwondo to MMA.

She was drawn to Bellator because the President, Scott Coker, shared the same traditional martial arts background and passion for martial arts as I do Loureda says. “I truly feel at home because he reminds me of my dad and my upbringing in Taekwondo, so I’m real excited about this deal with Bellator. I have a really good gut feeling about this.”

She is a true martial artist, and MMA has allowed her to demonstrate the honor, discipline and tradition that comes with being a black belt. Bellator has given her the opportunity to influence the lives of thousands of people, especially women. She’s really excited to just get in the cage and confront whoever they put in front of her and win that challenge.

“I really want to leave my legacy on this world as being the best female martial artist who has ever stepped on this planet.”

For more information and to keep up with the latest Taekwondo Times News follow us on social media: