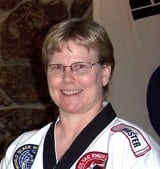 When you begin your journey in TaeKwonDo, most people do not think about the words Dedication, Commitment and Loyalty. We follow the five tenets of TaeKwonDo, courtesy, integrity, perseverance, self-control and indomitable spirit; but without dedication, loyalty and commitment to TaeKwonDo you will not achieve them.

According to Webster’s Dictionary these words can be defined as follows: dedication can be defined as the state of being dedicated. Dedicate is to devote wholly and earnestly to some person or purpose.   Commitment can be defined as making a pledge or promise to accomplish something. Loyalty is to be loyal; this is to be faithful to one’s oath, commitments, and/or obligations. When you become a true practitioner of TaeKwonDo these three words are of great importance.

When I think of these words I think of Grand Master Woo Jin Jung. He has dedicated his life to the unification of Korea. He has tried to do this through his commitment to TaeKwonDo. TaeKwonDo being the common denominator between the two sides, GM Jung has used this as a means to begin conversations between the two sides. Each small step is a great stride in the direction of unification. He has also dedicated his life to bringing TaeKwonDo to the world. GM Jung has also shown his loyalty to his country and TaeKwonDo by striving to accomplish what he has set out as goals for himself: The unification of North and South Korea and to bring TaeKwonDo to the world.  Through his many schools and thousands of black belts he is spreading TaeKwonDo and the TaeKwonDo way of life. Though there have been obstacles, he has remained constant in his pursuit of these goals. His loyalty to TaeKwonDo and his TaeKwonDo family are immeasurable; if you need him he is always there to talk on the phone or come to your aid.

GM Jung has been a great inspiration to me and many others. When I first met GM Jung I was scared to death. It was GM Jung, he brought us TaeKwonDo and he is GREAT! Once I met him and spoke with him, he is a real person with goals and struggles just like the rest of us. Through great sacrifice he has become a great man. As I take a look at the path I have chosen to follow with my life, TaeKwonDo has played a huge part. There have been many cross roads where I could have chosen to take a different direction but through my experiences in TaeKwonDo, I chose to persevere through the difficult situations instead of taking the easy way out and I am a better person for this. Since my last test I have had a hip replaced. The doctor told me no more TaeKwonDo, I was devastated to hear this. I did not give up with those words, I asked more questions and did research to find out that as long as I was smart with the things I do I could continue to teach and participate in TaeKwonDo. The big things were no more running or jumping and absolutely no pivoting on that leg. Then the Doctor told me I could try but if there was any pain or discomfort to stop. Listen to what your body is telling you. So here I am today preparing for my 6th Dan test and scared to death that I may over do it. As long as I maintain good self-control and don’t get carried away during test I will be fine, keeping my kicks to low/middle and very light pivoting on my leg. There have been many times in GM Jung’s life where he could have been swayed to give up but for his commitment and dedication he persevered and has continued to bring us TaeKwonDo.

I have tried to bring that level of dedication, commitment and loyalty to TaeKwonDo in my community and to my TaeKwonDo Family. I try to show my loyalty to GM Jung by attending as many TaeKwonDo functions as I can, helping wherever I can; showing support whenever I can. I try to teach the TaeKwonDo membership pledge, making sure that each student understands its meaning. That TaeKwonDo is a way of life, a choice that you make and it should not be taken lightly. That each one of us uses what we learn in TaeKwonDo; every day in every situation whether we are young or old.

I have found that by stressing these things as well as the physical aspects of TaeKwonDo, each student has a better life and will take what has been learned with them throughout the remainder of their lives. In all choices that are made the student now brings a new level of dedication, and commitment to the decision or goal. Just knowing you have accomplished what you may have thought as impossible through your journey in TaeKwonDo, this gives you the confidence to make the commitment to any goal that you set whether others believe in you or not. You have gained the confidence in yourself through your accomplishments in TaeKwonDo.

Just knowing what GM Jung has done with his life and the obstacles he has overcome and what he as accomplished has given me the confidence to set my goals high and to commit to accomplishing them when others doubt my abilities. My greatest thanks go to GM Jung and the great example he has been for my life.