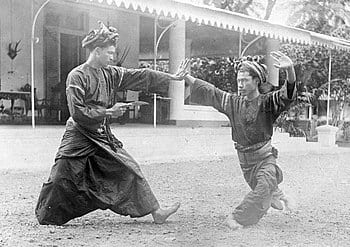 Silat is a collective word for a class of indigenous martial arts from the geo-cultural area of Southeast Asia, more precisely in the Malay Archipelago, a region known locally as Nusantara. It is traditionally practised in Brunei, Indonesia, Malaysia, Singapore, portions of the Philippines,  southern part of Thailand and central part of Vietnam. There are hundreds of different styles (aliran) and schools (perguruan) but they tend to focus either on strikes, joint manipulation, weaponry, or some combination thereof.

Silat is one of the sports included in the Southeast Asian Games and other region-wide competitions. Silat first made its debut in 1987 Southeast Asian Games and 2018 Asian Games, both were held in Indonesia. Training halls are overseen by separate national organisations in each of the main countries the art is practised. These organisations are Ikatan Pencak Silat Indonesia (IPSI) from Indonesia, Persekutuan Silat Kebangsaan Malaysia (PESAKA) from Malaysia, Persekutuan Silat Brunei Darussalam (PERSIB) from Brunei and Persekutuan Silat Singapura (PERSISI) from Singapore. Practitioners are called pesilat.

While the word silat is used by Malay-speakers throughout Southeast Asia, the art is officially called pencak silat in Indonesia. The word silat has been adopted worldwide in reference to professional competitive silat for sport, similar to the Chinese word wushu. Regional dialect names include penca (West Java), dika or padik (Thailand), silek (the Minangkabau pronunciation of silat), main-po or maen po (in the lower speech of Sundanese), and gayong or gayung (used in parts of Malaysia and Sumatra). The clear distinction between Indonesian and Peninsular silat is a relatively recent one based mainly on post-independence patriotic sentiments. The term silat Melayu (“Malay silat”) was originally used in reference to Riau but is today commonly used for referring to systems created on the Southeast Asian mainland. Generally speaking, silat Melayu is often associated with fixed hand positions, low stances, and slow dance-like movements. While this generalisation does not necessarily reflect the reality of silat techniques, it has had a notable influence on the stereotypical way the art is portrayed in Malaysia, Singapore, and to some extent Brunei. Courtesy wikipedia.