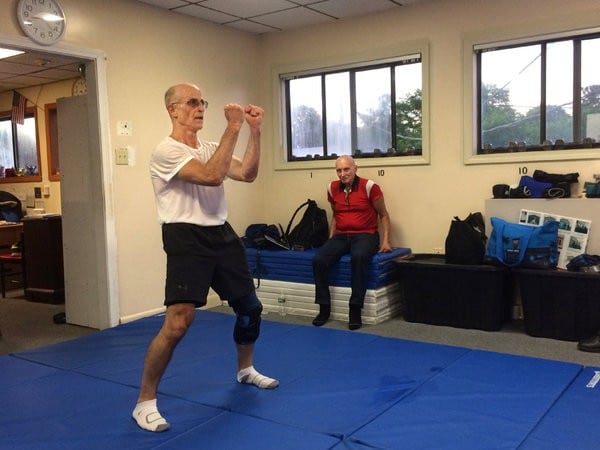 Dr. Kirk Daffner, 61, paused to center himself before beginning the first of more than 108 carefully orchestrated maneuvers. He jumped, rolled, did one-armed push-ups and slapped the mat with his open hand. He jumped in the air spread-eagled, touching his feet, then kicked at an unseen foe.

Along with a handful of other men, he has been practicing routines like this for more than 40 years, under the careful supervision of George Gonis, who runs a small, second-floor gym where they sweat off several pounds during each 90-minute session. All have been training in the ancient Greek martial arts style known as pankration. Some since their teens or early 20s.

“His views about how to maintain health and how to promote good aging were really decades ahead of his time,” said Dr. Daffner, chief of the division of cognitive and behavioral neurology and director of the Center for Brain/Mind Medicine at Brigham and Women’s Hospital.

It’s not just the physical exertion Pankration requires, but also the mental fortitude and way of life the practice fosters.That has increasingly been shown in studies to be vital for aging well.

The scientific world has finally caught up to Mr. Gonis, said Dr. Daffner.

Mr. Gonis, who practiced law for several years before turning to karate full-time, has always advocated for fitness, along with a Mediterranean-style, plant-based diet and intellectual stimulation. “I don’t drink, I don’t smoke, I don’t do drugs, I never did,” Mr. Gonis said after the recent Wednesday night class.

The bookshelves in Mr. Gonis’s office remain stacked with textbooks, including calculus and ancient Greek philosophy, and he has always required his students to write papers about the philosophers. “The brain is part of the body,” Mr. Gonis said.

Each series of Greek karate maneuvers, such as the “form” Dr. Daffner demonstrated recently, tells a story from ancient Greece. His moves that night illustrated Odysseus returning from a 20-year-long voyage and then fighting off the 108 suitors who wanted to claim his wife, Penelope. To Dr. Daffner, presenting the form is an act of beauty as well as a mental and physical challenge.