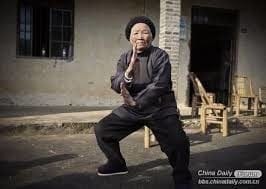 At 94-years-old, Zhang Hexian has a particular set of skills that make her a nightmare for thugs. Residing in Ninghai County in east China’s Zhejiang Province she has been practicing Chinese martial arts since she was four and through the years she has refined her skills with great diligence and effort to become affectionately known as “Kung Fu Grandma”. Regarded as “the village of martial arts,” nearly everyone in the village where Zhang lives practices kung fu. As the eighth descendant of her family, Zhang learned kung fu under her father’s instruction at the age of four and has continued to practice throughout nine decades.  I learned basic martial arts skills such as pushing palm and throwing a punch at an early age,” said Zhang Hexian.

Zhang recalled that she once fought a bully when she was young. The bully was beating his wife when Zhang saw him. To uphold justice, Zhang grabbed his collar, ripped his shirt off and urged him to behave well.

She wakes up very early and does physical exercises every morning. She usually runs around the village for morning exercise.

Zhang is a warm-hearted woman willing to help others, which is one of the secrets to her longevity.