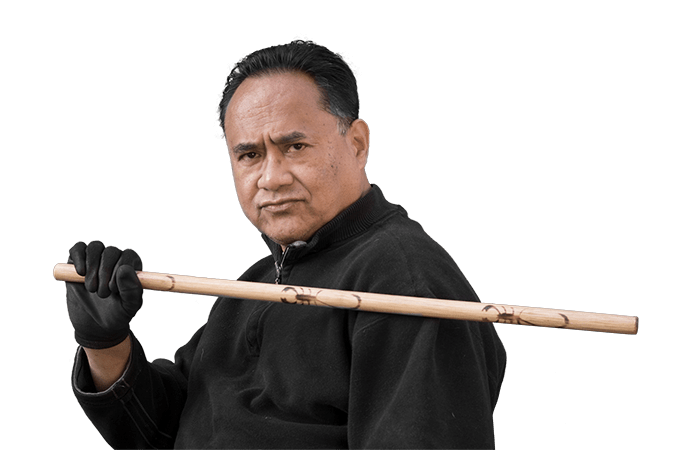 When Carlito Bonjoc Jr. gets his arms going, it’s best to get out of his way. The blur of his hands wielding escrima sticks is a hypnotic, fluid movement. It’s a bit like watching a finely choreographed dance. But what Bonjoc is demonstrating is the Philippine martial art of escrima. The is a difference, he does it from the seat of his wheelchair or with the aid of crutches. The 46-year-old escrima master was born with spina bifida, a congenital spinal cord defect that can affect the lower body and result in paralysis, but he doesn’t tolerate pity. “There are so many people out there that have physical challenges,” says Bonjoc, whose calm composure contrasts sharply with the intensity of his gaze. “Some are born with it; we’re the lucky ones because this is what we grew up with. We learned to deal with this early. Now, with the reality of war, we have a lot of young people that come back from the war with some of their body parts missing, or some get in a car accident and lose a limb or become paralyzed, and those are harder to take because they had all their physical abilities growing up and then all of a sudden it was taken from them. That must be much harder than what I had.” Bonjoc was born on the southern Philippine island of Mindanao and immigrated to Stockton when he was 9. At school, bullies picked on him because of his physical condition – “kids would hit me and then take off running because they knew I couldn’t chase after them” – and his difficulty with English. When he was in college, he lost his right leg to infection. Escrima, he says, is what gave him the confidence to stand up to the bullying. “I wanted to get even,” says Bonjoc. “When I was younger, I used to get frustrated, and all somebody had to say was that word, ‘cripple,’ and the next thing I know, I’m swinging. All the martial arts goes out the window, and I’m just swinging. But over the years, because of the discipline I gained from the martial arts training, I got away from all that. I didn’t have to be vengeful.” The way Bonjoc learned escrima is typical of how the martial art form developed: passed down from father to child in an oral tradition. It’s because of this lack of early documentation that the origins of escrima, and its aliases (eskrima, arnis and kali), can vary from region to region. What is clear, however, is that a centuries-old fighting style did develop before Spanish colonialism, and it was indigenous to the Philippines. Bonjoc says escrima is most notable for its ability to use the same fighting moves either with or without a weapon and for the weapons themselves. There are only two types: sticks and knives. Bonjoc is a fourth-generation escrima master who’s traveled the world as a guru. His family’s system, Cadiz Lapu-Lapu, is named in honor of Bonjoc’s great-grandfather, who settled the town of Cadiz, and Chief Lapulapu, the Philippine hero who killed Portuguese navigator Ferdinand Magellan. Cadiz Lapu-Lapu is just one of many styles. Considering that the Philippines is a nation of 7,100 islands, and that villages developed their own ways to defend themselves that they then handed down, there are innumerable escrima systems. Though he has his own school in Stockton, Mata sa Bagyo (or Eye of the Storm), he travels to San Jose’s De Anza Park every other Sunday to help a buddy teach escrima. It’s only fitting that Bonjoc chooses October, which is Filipino American History Month, to focus on promoting escrima. “It’s handed down from generation to generation, and if we don’t continue to do that, it will be lost.” The History Channel’s “Human Weapon” has devoted an episode to escrima. TV and YouTube won’t be the only places to see escrima, though. Bonjoc’s dream is to form a nonprofit and travel the nation as a motivational speaker with a team of disabled martial artists. “I’m here to help educate people not just about the Filipino culture and the Filipino martial arts culture, but also to understand that we all have differences and just because somebody is different from you physically or mentally, that doesn’t mean that person is not a human being. That person has a worth, and they have creativity, and if you just look close enough, you will see that and you will see that person for who he is.