Taekwondo hoped to bring two Koreas together in PyeongChang 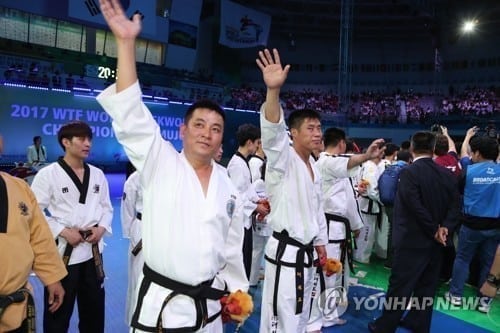 SEOUL, Jan. 9 (Yonhap) — North Korea on Tuesday offered to send a taekwondo demonstration team, along with athletes and others to next month’s Winter Olympics in South Korea, shedding light over a possible reconciliation between two Koreas through sports.
During the first official talks between two Koreas in more than two years, Pyongyang said it plans to send a delegation of athletes, cheering and performing art squads as well as its taekwondo demonstration team to the 2018 Winter Olympic Games in PyeongChang, some 180 kilometers east of Seoul.The Games are scheduled for Feb. 9-25, with PyeongChang’s adjacent sub-host cities of Gangneung and Jeongseon hosting ice and alpine skiing events.

Whether North Korea will participate the first Winter Olympics on the Korean Peninsula had remained uncertain until Pyongyang’s leader Kim Jong-un expressed his intention through a New Year’s speech.

If South Korea accepts the proposal and North Korea keeps its word, the taekwondo exchange is set to play a significant role in their reconciliation. The martial art is shared by both sides although they are still technically at war as the 1950-53 Korean War ended in a truce, not a peace treaty.

North Korea currently leads the International Taekwondo Federation (ITF) as the governing body of its style of taekwondo, which compares to the World Taekwondo (WT), a Seoul-based organization whose standard is accepted by the International Olympic Committee.

Despite the differences, taekwondo has been playing a key role in the relationship between the two Koreas.

Last June, the ITF also sent a demonstration team to the World Taekwondo Championships held in Muju, 240 kilometers south of Seoul, marking the first visit in 10 years and the first sports exchange between the Koreas after South Korean President Moon Jae-in took office in May.

Responding to North Korea’s latest offer, World Taekwondo President Choue Chung-won said his organization will make preparations to have the martial art lend its hands to the reconciliation of the Koreas.