Koreas to be united by traditional martial art of taekwondo — again 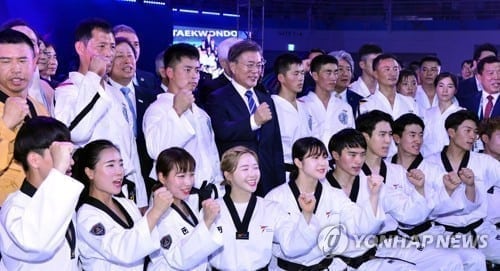 SEOUL, Jan. 17 (Yonhap) — The Korean martial art of taekwondo brought the divided Koreas together, if only briefly, south of the tense border last summer.

And it will do so again at the tail end of winter, during the Feb. 9-25 PyeongChang Winter Olympics.

North Korea agreed Wednesday to send a taekwondo demonstration team of about 30 to PyeongChang, 180 kilometers east of Seoul. The team will give performances in both PyeongChang and Seoul during its stay. The two sides will decide on a specific schedule later.

Last June, during the World Taekwondo (WT) World Championships in Muju, 240 kilometers south of Seoul, North Korea sent a demonstration team for a total of four performances, including during the opening ceremony of the world championships. The taekwondo practitioners from the North belonged to the International Taekwondo Federation (ITF), a separate taekwondo entity from the WT.

The WT and the ITF have different sets of rules, and the WT is the only taekwondo body recognized by the International Olympic Committee (IOC). But that hasn’t prevented the two organizations from making efforts to work together.

Most notably, they signed a landmark agreement in August 2014, titled “Protocol of Accord,” which outlined areas of mutual cooperation. And ITF sent its delegation to Muju last summer to honor the agreement. It was the first instance of inter-Korean sports exchange under the new Moon Jae-in administration in the South.

During the ITF team’s visit, Moon called on North Korea to participate in the PyeongChang Olympics and expressed his hope for a joint Korean team.

The WT was scheduled to pay a reciprocal visit to Pyongyang in September but the trip never materialized, amid a series of North Korean military provocations.

The North’s nuclear test and missile launches also threatened to derail plans for a joint taekwondo demonstration by the WT and the ITF during the PyeongChang Olympics. But the mood changed for the better at the turn of the year, after North Korean leader Kim Jong-un offered to send an athletic delegation to PyeongChang in his New Year’s message.

On Wednesday, they settled on the size of the taekwondo team, which will be tasked with bringing the Koreas closer